INTRACORP was an exhibition presented in the the visiting day centre of a Rotterdam hospital. Besides artworks, a catalogue (a set of ‘patient appointment cards’), a multiple (a ‘first help kit’ with various artists contributions) and a website were produced. All texts where written a pseudo ‘instructions for use of medicine’ style.

The concept development and design of the invitation, the ‘catalogue’ (patientcard set) & multiple (Minke Themans) and website (Ariënne Boelens) was done in close collaboration with these two now established designers. A backup of the website, an artwork in itself, can be browsed here

Intracorp stands for intra (internal) corpus (body) but also for corporation, a term which indicates a legal body. This word-construction refers to the constellation of works which the participants of INTRACORP have developed for a very typical social space, namely the hallways and waiting-rooms of the policlinics of a hospital. People come here “in anticipation of”, until it is their turn for a test, an examination and sometimes a result. People also come here expecting that they will learn more about their, for one reason or another, not “normally” functioning body, believing or hoping that this condition can be cured or improved. Although much can be realized by the current state of science certainly not everything is possible. This creates insecurity. The medical illusion is partly fed by medical science which still puts a claim on the makable body and the social structure within which it has developed. But certainly also by contemporary media which invades our living room with this illusion daily. 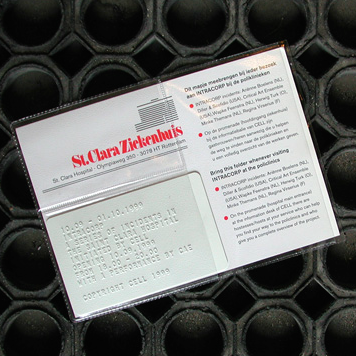 Invitation and patientcardset ‘catalogue’ (design by MinkeThemans, based on traditional appointment cards of the hospital)

INTRACORP is about this advancing medicalization and the often curious way in which this is communicated, in a hospital, but also outside it: by the way in which a hospital as a social space influences people (Wapke Feenstra and Regina Virserius), by means of advertisements and medicine wrappers (Diller & Scofidio, Ariënne Boelens and Minke Themans), and the cultural and political context in which there is space for staggering developments of medical science. Developments which are usually implemented without a broad social discussion, while all of us are involved (Critical Art Ensemble and Herwig Turk). The impact on society is large already and will probably grow larger still in the future.

INTRACORP deals with the human body, on that which happens internally and how our society communicates about these matters.

Artists multiple: a first aid kit, with contributions of the participating artists

END_OF_DOCUMENT_TOKEN_TO_BE_REPLACED

The Society of Reproductive Anachronisms / The Cult of the New Eve